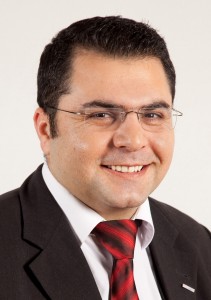 Sahin Karaaslan was born in 1979 in Idil, Turkey. In 1989 – at the age of 10 – he came to Germany in the Swabian Leonberg. There he got to know the value and benefits of long-term integration work. Among other things, there have been regular friendship festivals, in which foreigners and German jointly committed and more than just mutual understanding developed.

Since 1994, Sahin Karaaslan lives in Leimen. He completed his secondary education at the Kurfürst-Friedrich-Gymnasium in Heidelberg, afterwards he began his medical studies at the Ruperta Carola (University of Heidelberg). Parallel to this he founded in 1997 in the Galeria Kaufhof the snack-bar “Firat Kebap”, which was well accepted. In 2003, the young entrepreneur adopted the supermarket in the basement of the department store and developed it to a service-oriented and highly successful gourmet market, the delikatessa GmbH. Shortly after followed the take-over of a Nahkauf and a Rewe store.

In 2012 Sahin Karaaslan was honoured as “Entrepreneur of the Year” by the Association of Turkish Businessmen Rhein-Neckar eV.

As an entrepreneur and junior doctor Sahin Karaaslan is member of the Marburger Bund, at the Chamber of Commerce, the Retail Association Nordbaden (as an advisor), the Federation of Self-employed in Leimen (board member), at Pro Heidelberg, and in Sponsors and Friends of Julius Springer School, Heidelberg (as a board member and Chairman 2). Since 2004 he is member of the GAL Leimen (Green Alternative List) and closely involved in the local political work since 2008. As Local Union Chairman of Leimen and Member of the County Board Kraichgau-Odenwald, he is also an active local politician for Alliance 90/The Greens.

Sahin Karaaslan is married and father of four children.

Sahin on the social web